I had watched the channel 4 documentary on Saturday evening and inevitably ended up comparing it to the one on BBC last night. The ad breaks aside, the BBC’s version came out on top because of the focus on people, perhaps because of Kevin Fong’s connection to the shuttle program. The personal emotional contributions from the NASA administrator, people who will soon out of  job and the touching discussion between Piers Sellers and three other astronauts discussing frankly the real danger of spaceflight  to life (the throttle-up and mach 19 moments). I also found it was quantitatively more informative (decent rate of 28,000ft per minute,  home-made sandwiches, a minimum of 1000 landing approaches and the first view of the high res digital camera – described by its operator).

An odd thought arose whilst I was watching the close-out crew doing their thing. They get pretty up-close and personal but they were all male and not all astronauts are.

Apart from their technical skills and professionalism, I wonder how much of  the “spirit” of the BBC guides the program makers? Like the Shuttle the BBC itself is a marvel of our times.  An excellent documentary -well done all.

On a personal note..

Almost exactly 21 years ago (28th July 1990) I was in Florida working on my Private Pilots Licence. The variable weather in the UK was just too variable and I went out there for a month.

I was training at an airfield in Titusville, a short distance from Merritt Island where the 3 mile long Shuttle Landing Facility is located. It is part of the John F. Kennedy Space Center.

On a tip from a local pilot, I sought and got clearance (with restrictions – minimum altitude 1000ft and remain 5000ft west) from air traffic traffic controller  to fly along the runway. At that time I only had completed my solo but not my final test!

This 3 minute video is from  21 year old VHS tape! Filmed on board Cessna 152 (N49010) by Bill Benson and my instructor in Florida was a brit –  Gary Evans from AirwiseUK Ltd who had also gone to Florida for the flying friendly weather. 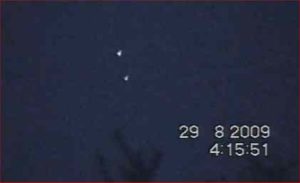 Want to see Shuttle launch from the UK without leaving home?

OK, its not quiet the launch but it is not long after. A coincidence of timing today is just right for an unusual view of the Space Shuttle Endeavor’s last ever flight. About half an hour after the Sun sets in the UK, Endeavor will takes off from Florida and heads our way.

For  short period after the sunset in the UK, it is still shinning on the shuttle a 130 miles up where has just arrived in obit and the Shuttle’s separated huge fuel tank is still on its way back for a splash down in the Indian ocean.

Conveniently, today the Sun sets at 20:20 in London and the night begins. The shuttle launches at 20:47 and about 20 minutes later, Endeavor and its huge fuel tank  should be visible over the UK as two bright Space-Station-like objects moving across the the night sky.  Should see something like this as filmed by Adrian West from Newbury AS.

All times are in BST. I have made the arrangements with NASA, there will be no delays and with the higher authorities  – the sky will be clear where ever you are:)