A review of my book “India’s Forgotten Rocket Pioneer” in the October 2020 edition of Spaceflight – the monthly journal of the British Interplanetary Society. A copy of the short review below.
Based in London, the BIS is the oldest independent space advocacy organisation in the World. It was founded in Liverpool in 1933. It is entirely a membership based organisation with many events organised annually. Former members include Patrick Moore, George Bernard Shaw and Arthur C Clarke. The Journal is subscription only – learn more and join the BIS here

A new breed of space historian has emerged in the last decade giving voice to forgotten lives every bit the equal of those fortune determined would become famous and lead the race into orbit and beyond. And the world of astronautics is the better for it. Other lives matter. This book from a leading space historian is a very welcome addition and brings a reminder of how much we have been missing from the chronicle of global achievements in rocketry and space exploration. For too long we have focused on the big names such as Tsiolkovsky, Oberth, Goddard, von Braun and Korolev. This book helps to restore the balance through the story of a minor player, a life worth recording because it tells the story of a man obsessed with future possibilities, and that should resonate well with readers of this magazine. It is the story of Stephen Smith, a big name in the world of philately but not well-known at all for his achievements in astronautics.

Stephen Smith caught the attention of this author during his research into his magnum opus on India’s Space programme, its origins, development and evolution, and inspired Gubir Singh to research more deeply into the life of this Anglo Indian. A man whose work was lost in the chaos that attached itself to India’s independence in the 1940s and the turmoil caused by political upheaval. It is a terribly sad reflection on the shifting winds of fortune that Smith’s work was overwhelmed by those seismic national forces.

For a decade from the mid-1930s, Smith worked alone in Calcutta conducting experiments with rockets and their potential for practical application. Combining his great interests in stamps and the mail service, he developed the idea of using rockets to deliver mail and in this aspiration joined other pioneers in other countries, such as Schmeidl in Austria, Zucker in Germany and Pendray in the United States. As Singh notes in this fascinating account of Smith’s life, the world was changing and the advancement of civil aviation and associated technical capabilities had, by the end of the 1930s, made rocket mail redundant.

Denied the opportunities and the support for his rocketry by the travails of wrenching India from the grip of Empire, Stephen Smith’s life passed into obscurity. This book is all the more rewarding because it puts light to the life of a pioneer whose work was denied the publicity it deserved by politics, war and the exhausting liberation of a continent from foreign ownership. This a must- read book. Available at an exceptionally low price, fully illustrated and with a pleasing, period design, I cannot recommend it too highly.

The format is a standard – standup and talk using a powerpoint presentation with a Q&A.  Limited signed copies of the book will be available on the day.  Book reviews here.

Only a limited number of copies will be available on the day. If you do want to reserve a copy of the book in advance – please send an email (info@astrotalkuk.org).

The BIS has been around since 1933 and has a fantastic library. If you have not visited before it is worth arriving 30 mins early and having a look at the display – tea and coffee are available for a small donation.

Post event photos. Thanks to Geir Engene from BIS.

My second book is available from next week – 4th October 2017.  Almost 6 years in the making, it is a detailed account of India’s Space Programme.  Available on Kindle and paperback from next week.

The subject is not everyone’s cup of tea. If it is yours and fancy doing a book review. Drop me a note on info@astrotalkuk.org and I will email you a free copy.

Overview of the book below and a bit more here. If Facebook is your thing then click https://www.facebook.com/TheIndianSpaceProgramme/. 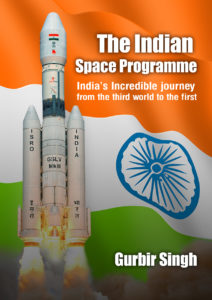 Sub Title: India’s incredible journey from the Third World towards the First

Overview: The story of the Indian space programme is described in 17 chapters, 600+ pages, 140+ illustrations, 8 appendices, 20+ tables and 1000+ endnotes. This book will be available from 4th October 2017 from Amazon.

Extract: Download a short extract from the book – Why India went to Mars.pdf

Ebook available for pre-order on Kindle Direct Publishing now and paperback from 4th October. More on the web and Facebook. 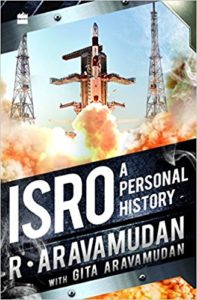 A delightful personal account of India’s space program from the very beginning. With personal memories from an era that otherwise would be lost. This is an important historical record of events that will in a few years be lost entirely in living memory. It is a non-technical account written by an engineer. The co-author Gita Aravamudan’s, experience in journalism is no doubt a key factor in the succinct and easy to read the narrative style.

As expected it is the personal anecdotes that really make this a fascinating reading. The reference to “chase a chimaera” wonderfully captures the extraordinary goal Sarabhai had set for India of 1962. Aravamudan’s personal accounts of meetings and working with Sarabhai, Bhabha and Kalam. While at NASA Wallops, his meeting the engineers from Pakistan captures a unique moment when the two neighbours’ space programs were at a stage of capability.

Visits by the Dalia Lama, J.R.D Tata, confrontation with local fishermen and union disputes paint a richer picture of Thumba than I had not come across before. The first-hand account of travelling to Australia to purchase a fully functioning telemetry station has surprising twists and turns. The public display of a moon rock at Sriharikota caught the imagination of the local population who turned up in unexpectedly large numbers to view it.

During his time as a director at Sriharikota, he describes the administrative burden of managing the town-like scale of the centre. As the director, he was responsible for the operations of a school, hospital, shopping centre, mosque and a temple in addition to managing the space missions. The authors remain apolitical and consistent with similar books by former ISRO employees. Naturally, the author is proud of his contribution and occasionally exaggerating ISRO’s achievement (i.e. ISRO being the first agency withMars Orbiter Mission to succeed with orbiting Mars on the first attempt). I would have liked to have seen more about the exchanges between the Indian and Pakistani engineers when the met at Wallops.

Historians of the future will be indebted to Aravamudan and his wife for chronicling a unique episode in India’s journey as a space power.