Scroll to the bottom for the audio and video.

Since the launch of Sputnik 1 in 1957, thousands of unmanned spacecraft have been launched, mostly to Earth orbit, but many have gone to the inner and outer planets, and four of them have pretty much left the Solar System altogether.

European Space Agency’s Mars Express spacecraft arrived at Mars in 2003 and is still operating almost a decade later. It is operated by people in a profession initiated by the space age itself. Spacecraft Operations Engineers are the individuals who quietly take over the responsibility of spacecraft after the nerve wrenching excitement of the launch is over.

The Hubble Space Telescope is the single instrument that has probably contributed more to science in the last decade than any other. Its success is not the size of its 2.4m mirror, there are many larger telescopes on Earth but its location.

Many amateur astronomers have captured images of Mars using a webcam. Such images are usually tiny but with integration techniques a surprising amount of surface details is visible. What would it be like if you could put that webcam in Martian orbit? Thomas and his colleagues have done just that.

Several ESA spacecraft have an attached Visual Monitoring Cameras (VMC),  usually installed for a very specific purpose. Mars Express had one to monitor the release of Beagle 2, after that it was switched off. Thomas describes the details behind the project that reactivated the camera in a paper published online and the fascinating video compiled from 600 images taken by the VMC webcam during the 7 hour Martian orbit on 27th May 2010. It continues to take images which are posted here.

Today’s quote from John Lennon is about the critical importance of the role of human understanding in interpreting the real world, even when you have all the evidence that you could possible desire.

Reality leaves a lot to the imagination

Last year it was Dr Edgar Mitchell from Apollo 14 – video here.  This spring, Ken Willoughby has arranged  Captain Dick Gordon to visit Pontefract. Dick Gordon flew on Gemini 11 and Apollo 12. Details of Dinner and Lecture below. Click here to download the flyer.

Dinner AND Lecture and includes: 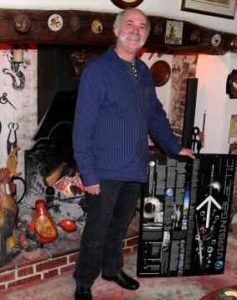 5/1/2011: Today is the last of the  hour long “Stargazing Live”  programs on BBC2 at 8pm with a comic Dara O Briain and a scientist Professor Brian Cox. But it is not over today!  Events continue until at least 16th January nationwide – See bbc.co.uk/stargazing.