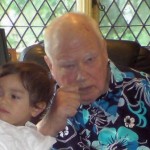 A different, interesting and at times a little silly episode this week.

Professor L Gay from the Southern University Edwardsville Illinois (SUEI) and Swinburne Astronomy Online but you will may be familiar with her voice on the probably most popular Astronomy podcast Astronomy Cast.

This recording was made in Oxford during her visit in March this year.

This week’s quote is from Anne Morrow Lindberg

“Good communication is as stimulating as black coffee, and just as hard to sleep after.”