In the early hours of Christmas day 2004, a small probe called Huygens separated from larger spacecraft Cassini. Three weeks later on 14 January it descended through Titan’s atmosphere to make the most distant soft landing in the solar system to date. Huygens transmitted data during its 136 minute descent through the thick atmosphere and a further 130m minutes from the surface until Cassini disappeared below the horizon.

Prof. John Zarnecki was the principal investigator for the UK based team that built the instruments that first made contact on the surface of Titan, Saturn and the solar system’s largest Moon.

In this conversation, recorded in December 2020, prof. Zarnecki recalls the how the mission came about, the science Huygens revealed at the time and today, a decade and a half later. Cassini-Hugens was a joint mission between NASA and ESA. He also shares his views on the value of international collaboration in space.

A video of this interview is available on Youtube. 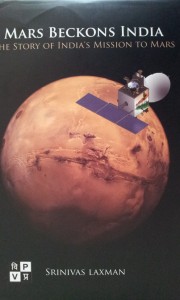 Disclosure: The author of this book, Srinivas Laxman reviewed my book “Yuri Gagarin in Manchester and London” on his blog in 2011.

The dramatic announcement by the Indian Space Research Organisation (ISRO) in August 2012 to launch a mission to Mars surprised everyone. It went further. In order to catch the next Mars launch window ISRO committed to a launch in November 2013. Miss that and they will have to wait for at least two years for the next one.  This is an extra-ordinarily bold undertaking for a space agency with the experience of only a single mission beyond Earth orbit under its belt.

In this book the author, a Times of India journalist, Srinivas Laxman interviews some of the key ISRO personnel to get mission details first hand. There is not a great deal of detail in the book.  Given the record breaking timescale, just over a year from announcement to launch, much of the detail is work in progress. The subtitle “The story of India’s Mission to Mars” is a little ambitious given that the mission has yet to begin. In the preface the author describes the book as a “public outreach exercise” which is much more appropriate objective. The book is well produced containing a generous number colour images. Some are disappointingly small and not all sit well within the narrative where they appear.

Although far from comprehensive, this is probably the most detailed information source authorised by ISRO in the public domain at the present. It was published early 2013. Mission details are still emerging. The 500kg spacecraft called Mangalyaan in the media but not formally by ISRO nor in this book, was made by Hindustan Aeronautics Limited, will be launched aboard a PSLV-XL launcher  (the same one used for the  Chandrayaan-1 mission to the Moon in 2008) in November 2013. Following six ever increasing elliptical orbits of Earth,  Mangalyaan will leave Earth on 26th November and enter Martian orbit of 500km by 80,000km on 21st  September 2014.

This mission, unlike Chandrayaan-1 does not have an element of international collaboration. All five instruments (Methane Sensor, Thermal Infra-red Imaging Spectrometer, Mars Colour Camera, Lyman Alpha Photometer and the Mars Exospheric Neutral Composition Analyser) are of Indian origin.

Also included in the book is some background to Mars missions in the past and an introduction to some of the key ISRO personnel too.  This is an ideal book for anyone new to the subject, especially students who are looking for a primer on the India’s first Mars mission. Currently it is only available in hardback. Particularly for the student community, the publisher should consider releasing an e-book version.

The book, published only in India is available online  from Bookadda  at RS175.

Launched 15 years ago today, the Cassini Huygens mission has been one of the outstanding successes of solar system exploration and a model of NASA ESA collaboration.

In episode 14 Professor John Zarnecki spoke about the science conducted from the surface of Titan by the Huygens lander in January 2005.

The European Space Agency’s Huygens probe had hitched a lift to Saturn aboard the Cassini orbiter. Six years after its arrival at Saturn, Cassini is still making spectacular discoveries about Saturn, its majestic rings and its many moons.

In this episode, Professor Carl Murray from Queen Mary University London talks about some of those discoveries and how the mission will eventually come to an end.

This interview was recorded during the National Astronomy Meeting in Manchester in March 2012.

As the dinosaurs on the Earth 64 million years ago discovered, comets and asteroids have the potential for unexpected arrival with devastating consequences.

The spectacular collision of Comet Shoemaker-Levy 9 with Jupiter in July 1994 dramatically raised awareness and no doubt a little concern amongst the heads of governments across the planet.

Since then, the British government has not really got engaged and so it is left to a handful of skilled and dedicated individuals through Spaceguarduk to provide the UK with its only organisation to address the hazards of Near Earth Objects.

The fireball over Europe in September 2012, demonstrated the risks are with us today.

The Spaceguard Centre was established by Jay Tate in 1997.