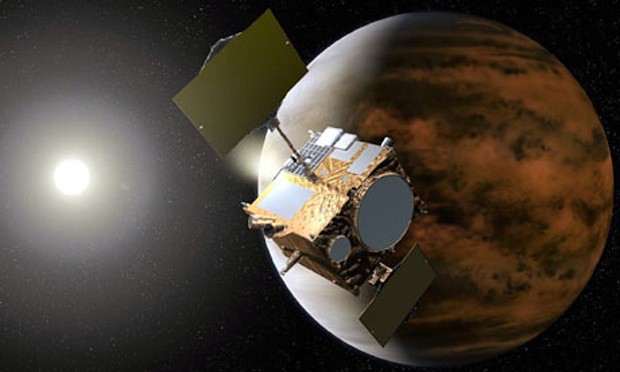 With two active rovers on the surface of Mars and six satellites in orbit, the Human exploration of Mars continues as never before. Two more missions will be leaving Earth for Mars in early 2016. However, the space news of this week that has not received the due global attention is the arrival of the Japanese spacecraft, Akatsuki in Venusian orbit on Monday. Compared to the social media storm of when the Indian Mars Orbiter Mission arrived in Mars in October 2014, Akatsuki’s arrival at Venus has been an unfairly subdued affair.

The highly successful European Venus Express mission came to an end early this year, today Akatsuki is the only active spacecraft in orbit around Venus. At 400 by 440,000km Akatsuki will orbit Venus every two weeks in a highly elliptical orbit. Jaxa engineers plan to tweak the orbit and commission all 6 instruments – 3 of which are already operational.

The story of Akatsuki’s mission to Venus almost mirrored the problematic Nozomi spacecraft to Mars in 1999. Jaxa’s Nozomi spacecraft suffered engine problems and failed to orbit Mars but did fly past it in 2003. Akatsuki, launched in 2010 also suffered engine problems and achieved orbit of Venus only on its second attempt 5 years after launch. Jaxa’s engineers employed some remarkable engineering solutions to achieve this success. Akatsuki will now orbit Venus for a two-year science mission. A more detailed write-up is available at Spaceflight 1010.