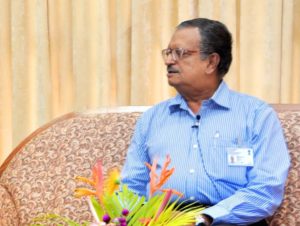 November 21st 2013 was the 50th anniversary of a rocket launched from India in to space. The launch itself was an all Indian affair but with lots of international support. The rocket was American, carried a French Sodium Vapour payload with assisted by a computer and a helicopter from the Soviet Union. From this meagre beginning, India has become a key player not only  in building and launching rockets  but also designing , building and deploying satellites.

This episode was recorded on the site of that first launch. Then  known as the Thumba Equatorial Rocket Launch Station and is today known as the Vikram Sarabhai Space Centre.  Sundaram Ramakrishnan, the current director of the  Vikram Sarabhai Space Centre (VSSC) talks about his 4 decade long career with the Indian Space Research Organisation. He has has played a central role throughout the development of India’s most reliable launcher – the  Polar Satellite Launch Vehicle (PSLV).